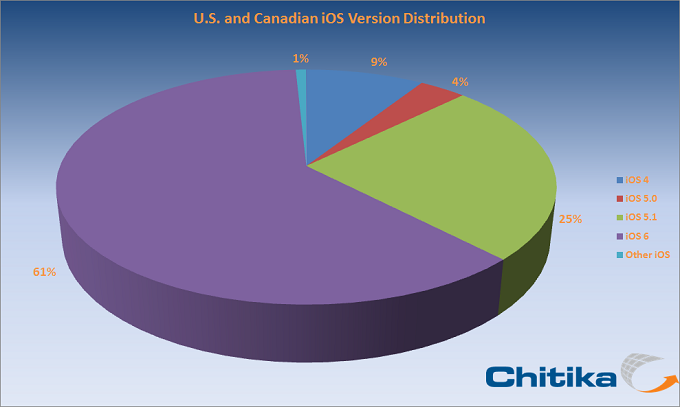 After its release on September 19th, 2012, iOS 6 notably achieved a 15% share of all iOS traffic in its first 24 hours, and saw an adoption rate of over 50% after only 2 weeks. Chitika Insights decided to see how the new OS’ adoption has evolved a full month out from its debut.

To quantify this study, Chitika Insights took a sample of hundreds of millions of mobile ad impressions coming out of the Chitika Ad network ranging from September 19th to October 19th, 2012. The growth rate of iOS 6 was then compared to total iOS Web usage using a time series to illustrate the rate of adoption of the new OS. A graph depicting this data can be seen below:

iOS 6 growth has decidedly leveled out over the past week, although it still is growing. Since our previous study on October 2nd, 2012, iOS 6 gained nearly 10% usage share, now constituting 61% of all iOS traffic, as seen in the graph below:

We expect small gains for the OS in the coming weeks, with the possibility of iOS 6 usage touching 70% once adoption peaks. The upcoming release of the iPad mini will likely accelerate this process.

Looking to test your Adobe XD designs on real people? Look no further than Poll the People! Our platform is free to sign up for, and we make it easy to get feedback from your target audience. So why wait? Sign up today and get started!

Report: iOS Users Driven to Update by Features Rather than Security

Why The Verizon iPhone is the Ultimate Threat to Android

What If AT&T and T-Mobile Actually Merge?