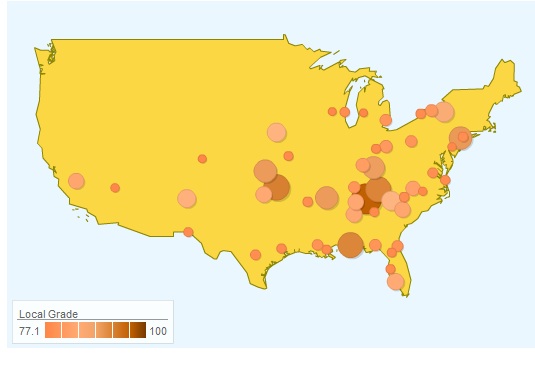 Browsing the internet often exposes the user to advertisements en masse, which often times are a little less relevant than one would wish. As search targeted advertising continues to progress, and advertising companies begin to think outside the box, they are beginning to target new parameters such as whether or not a search is “local.”

Chitika analyzed a large sample of searches in its online ad network from 7/4/2011-7/11/2011 to examine concentrations of local queries and where the city from which they came. In smaller cities, local search typically takes up a larger portion of user queries, in some cases almost 1/3 of total search traffic. On the other hand, larger metropolitan areas, such as New York City (in which only 17% of searches are local), have a much lower percentage of local search. Overall, the data appears to indicate an inverse relationship between population density and the propensity to search local.

Of the top 50 cities which are most likely to search local, 64% can be found in the southern US. Of the top 50 cities which are least likely to search local, 48% are located in California or New York. Again this comparison suggests that in the less dense interior of the U.S., there will be a greater demand from users for local search results, perhaps out of necessity. As geographic and population density decrease, a user’s tendency to search local has the potential to increase, for the importance of searching locally to “find what you need” not only takes greater priority but, begins to encompass a different definition. For instance, a user in Montana would be more apt to drive 30 miles to the grocery store than one in New York City, for whom driving that distance would be out of the question, let alone searching for it. 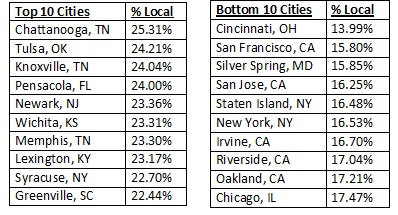 Of the top 10 cities for local searches, 80% are located in the interior of the US, and are significant industrial and material hubs for their region (in addition to the geographically sparse surrounding areas). In contrast, of the bottom 10 cities, 70% can be found in either California or New York which although are states known for favoring local businesses, further illustrates the disparity. These results also suggest that the likelihood of a user to search local is derived more out of necessity than economic activity, and that advertisers that are targeting users locally would be better served to focus on the users to which local search really matters.

Check out the interactive map below to see where your city lies!

Looking to create canva mockups but not sure where to start? Poll the People is here to help! We offer a free signup so you can test our platform and see how easy it is to create beautiful mockups. So what are you waiting for? Sign up today and start creating!

Google+ Opens to Everyone — No One Cares

Google Results, Positioning, and CTR: Not What You’d Expect