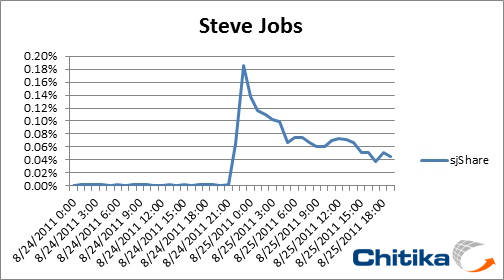 Steve Jobs: The End of a Legacy

August 24th marked the end of the Steve Jobs era. Apple’s iconic leader announced that he was stepping down as CEO, effective immediately. During Jobs’ years at the helm, he revolutionized the computing, mobile, and digital distribution industries. Some of his most significant contributions to the tech world include Mac OS, iTunes, the iPod, and the iPhone. He will undoubtedly go down as one of history’s greatest innovators.

His departure from Apple shocked the blogosphere, instantly becoming the hottest trend on Google and Yahoo Buzz. Chitika Insights wanted to see how much of an impact Jobs’ resignation made on search traffic. 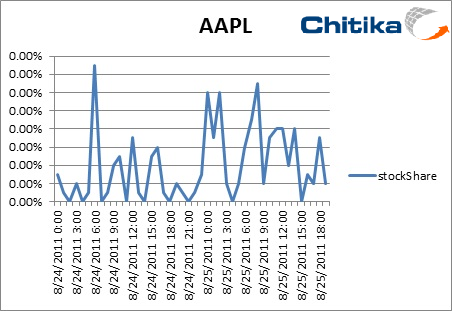 By the morning of the 25th, searches declined. Queries for “Steve Jobs sick” and “Apple’s new CEO” became more frequent, meaning people started focusing on factors surrounding his resignation, rather than the resignation itself.

In contrast, when Insights investigated the search traffic of the Apple’s stock, they didn’t see anything close to the seismic spike like with Steve Jobs’ traffic.

People seem far more interested in Apple’s leader than they are with the company itself. Many wondered whether Apple’s shares would take a hit after Jobs left. While there was a slight drop, Apple stock wasn’t affected all that much.

Although the “Podfather” has relinquished his duties as Apple’s head, chances are he will remain heavily involved with the company. You can safely assume that he’ll have a hand in quite a few products in Apple’s pipeline. He remains confident that Apple will continue to be a market leader, saying “I believe Apple’s brightest and most innovative days are ahead of it.”

Get your brand’s perception tested on real people for free! Sign up for Poll the People today and see how your brand stacks up. We’ll provide you with honest feedback and insights so you can make the necessary changes to stay ahead of the competition. Don’t wait, sign up now!

Firefox 6 Takes Off, up to Over 8% of Traffic

iPad Still Leads Tablet Market for Web Traffic; How Does the Competition Stack Up?

Study: Apple iPad Accounts for 94.64% of all Tablet Web Traffic